I didn’t expect to read all of this book. I picked it up to get more information about a perfect wave I’d heard the author describe in an interview. But I ended up falling into it so hard that when I moved, I returned my copy to one library, logged into a different library account, placed a hold, and a new copy was waiting for me when I arrived 2000km away.

I am not a surfer. I have surfed, in the way Finnegan rebukes, on a longboard on vacation. But you don’t need to know the lingo or the history to enjoy Barbarian Days. Finnegan is damn good at bringing the reader onto the wave. At first I thought it was his descriptions, but I look back at the writing and it’s not the adjectives alone that bring it to life. He turns waves into stories with a beginning, middle and end. There is plot to each session – specific events which cause further events – so that even when the anatomy of the wave escapes my imagination I can still read along full of emotion.

“And so came that last wave. The tide was dropping. Bryan had already gone in. The swell was also dropping. The wind had clocked around and gone light northeast – making for messy conditions and a hard-looking, army-green surface that resembled Ventura more than it did the tropics. A very solid set appeared, backlit and thundering far up the reef. I paddled over a couple, having learned a measure of patience, and took the third wave. It was bumpy but beautifully shaped, and I hurried because the onshore wind was likely to make it crumble quickly. That happened. The wave also swung around harder than most, so that the long wall ahead seemed to be hitting the reef all at once, peeling even faster than usual. I began to wish I had not chosen this wave, but it was too late to pull out or even, I realized, to dive off – the tide seemed to have dropped two feet since my previous wave, and coral heads were suddenly boiling up everywhere. Worse, the wave seemed to be growing as it ran down the reef. It was now several feet overhead and the face was not clean. There were weird little sections and chandeliers falling and throwing. But it was extremely fast and I was low in the face and now it was dredging, sucking all the water off the reef. I had, again, no exit, no choice but to drive, pedal smashed to the floor. After a rapid-fire series of critical sections, surfing blind, things happening too fast for me to react except instinctively, I came skittering out into the channel. I lay down on my board, shaking. Then I struggled in, paddling against the current. On the beach, I got only halfway up to our campsite. On my knees in the sand, in the twilight, absolutely spent, I was surprised to find myself sobbing.”

I had it in my head that only professionals could get inside barrels, that someone who wrote for The New Yorker couldn’t possibly surf anything over six feet. Here’s the author at age 63, in 2015, proving me so so wrong. 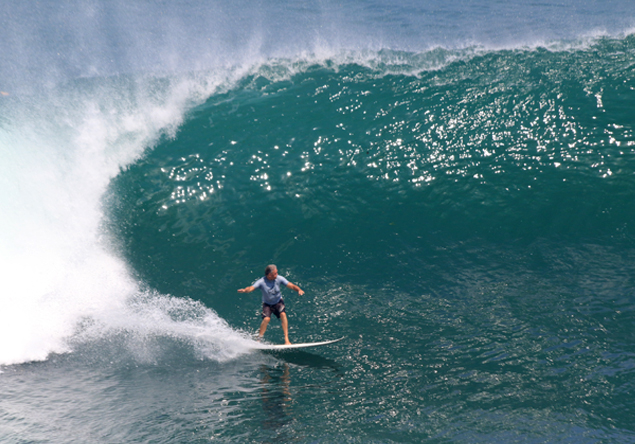 It’s not all about surfing though. This book taught me about the psyche of young men, who I used to brush off as sex-hungry and careless. Finnegan was both, and he’s honest about it, but he breathes a little intellect into those foggy hormone-riddled days. He helped me see how angelic boys can turn into cocky teens but still become respectable men. This book showed me how a writer can simultaneously run away and towards their career, full of doubt and some promise, to that golden dream of earning a living from the craft. The surfing is seductive though, so much that I grew frustrated when he paused to acknowledge his marriage, his daughter, a new job – the normal stuff of memoir – because I just wanted to get back to the waves. Not necessarily for the whiz-bang of the surf, but because he’d convinced me that each new wave was the only true mark in the progression of life. How was his arm strength holding up? What kind of board technology was he riding? How did the locals treat surfers? Were there others on the water? Through Finnegan we see not just his personal development but the changes in surf culture and global politics (he lived in South Africa during Apartheid).

The only thing missing is a bit more of the pain. My skin gets raw soaking for hours in the harsh, salty ocean, and that’s just on baby beach waves. Finnegan gets tossed under mammoth torrents, his back torn up by coral and rocks, his hands so numb in cold northern ocean that he has to ask strangers to turn the ignition on his car. In the book these facts are only afterthoughts to the story of the wave. Maybe that’s how Finnegan feels, but I wish he’d spend more time on the strain of simply being out on the ocean day after day. Then again, that would leave less room for the joy.